Yesterday was Dad’s birthday and we celebrated at this unusual-sounding Chinese restaurant located roughly in between Taman Tun Dr. Ismail and Damansara Utama. 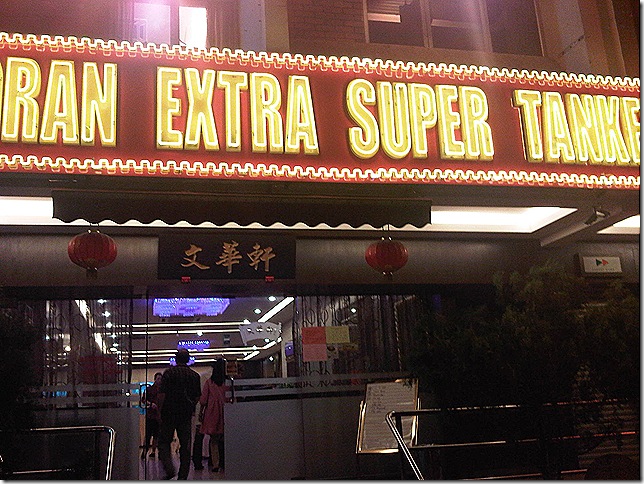 That’s the best picture I could take as there were cars behind me waiting to get into the car park. Oh yes, and with the current plague of armed robberies, do take care when parking your car within the vicinity – the area is very dark at night.

We ordered the Roast Duck which was priced at RM88.

Rest assured that this is only half the portion of the duck. I didn’t eat the duck as I was still recovering from an attempted robbery from two weeks ago but according to my family members, the roast duck meat was rather dry and tough.

The steamed tilapia fish (so-called ‘Africa Fish’) (about RM40++) tasted pretty normal although the fish was fresh, which is the main thing. Put it this way, if you wanted a filler and you are coming with a big group for dinner, then go for this. If not, this dish doesn’t offer anything extra to your palate. 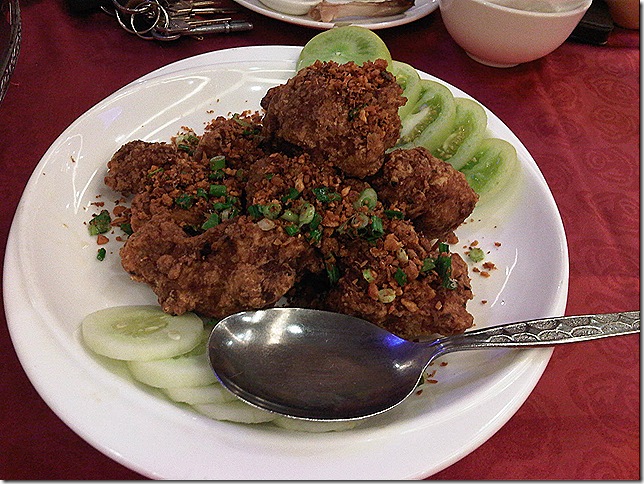 I super loved this Fried Pork Ribs (RM20). Juicy and presented in bite-sized portions with dried shrimp bits, you can’t go wrong with this tasty dish. Like the above roast duck, this came garnished with green tomatoes and some cucumbers.

There was also this vege dish ‘dragon leaf’ but it didn’t impress me at all – just some long-stalk greens stir-fried in some boring plain sauce, so I won’t bother to review it. It tasted like scallions which I don’t really like.

This is the famous ‘Thousand Layer Crispy Beancurd’ (RM52). The misnomer is quickly forgotten when you sink your teeth into one of these – the springy bacon layers complemented the soft tofu very well. Remember to pre-order this dish or you won’t be able to enjoy this. 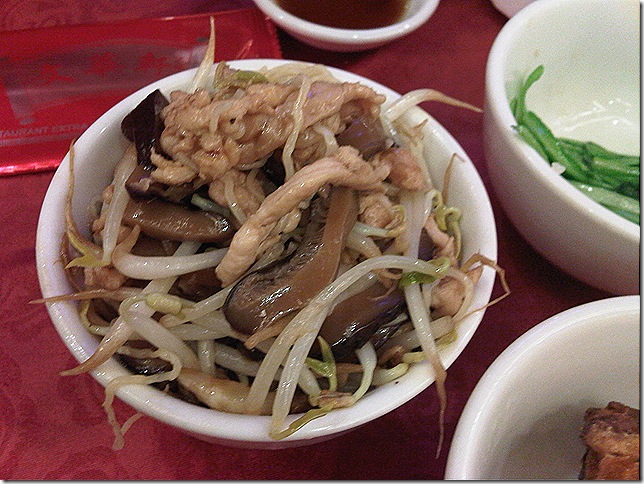 Rounding up this session would be the ‘Birthday Noodles’ (forgotten the price). This is another dish that I liked – it was not very salty and came with generous amount of bean-sprouts, pork slices and Chinese mushrooms. There was also enough sauce to ensure that the noodles don’t dry up too fast while you were busy indulging in the other dishes. In the picture above, you could see a sample of the ‘dragon leaf’ vegetable at the top right hand corner.

The bill came up to RM290, which includes a jug of chrysanthemum tea.

We had anticipated a figure around RM350.00, so the lower price was a delight to us. On the way home, we were already talking about coming back again.