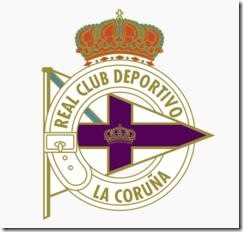 Deportivo La Coruña has been relegated from the La Liga – and ironically after a 2-0 defeat at home to my beloved Valencia CF.

The ‘Super Depor’ affection may have been long gone, and for a team usually accustomed to midtable obscurity since the departure of coach Javier Iruretagoyena (more commonly known as ‘Irureta’) in 2005, ‘ Los Branquiazuis’ has gone from promising football legends to embracing a nadir of its fortunes.

While the team has only won one La Liga title in its entire history spanning more than a hundred years, you’d have to first appreciate the size and scale of the demographics involved. First up – the stadium, ‘Estadio Riazor’ seats only 34,600 spectators. While hardly small by Spanish League standards (with the likes of Getafe, Real Mallorca, Villareal CF and more having smaller arenas), the stadium is dwarfed by the imposing Camp Nou of Barcelona; Estadio Santiago Bernabeu of Real Madrid; and Estadio Mestalla of Valencia CF. That modest but determined Deportivo could win the title (in the times when the likes of football money was prominent in the late 90s) was testimony to greatness. The team features for the city of A Coruña in Galicia, Spain which has a reasonable population of 250,000 inhabitants.

This team from the northwestern part of Spain may not be as glamorous as its European title-winning rivals but its feats were significant for mention.

At the time when ‘Super Depor’ came to the spotlight, it was also the time that Roy Makaay came to prominence in the late 90s as well. 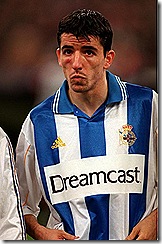 (Icons of the past – Dreamcast, Deportivo and Dutchman Makaay)

Never quite a mainstay with the Oranje setup, (where he would still need to beat the likes of Jimmy Floyd Hasselbaink and Pierre van Hooijdonk just to rub shoulders with Dennis Bergkamp and Patrick Kluivert upfront), he proved a lethal goalscorer in his debut season for ‘Super Depor’ with 22 goals. First plying his trade with SBV Vitesse of Holland and later, with Spain’s CD Tenerife, Makaay didn’t win the Pichichi (top scorer) award that season – that honour went to Salva Ballesta (who was playing for Racing Santander, and who later joined Valencia CF but never quite reaching the same standards) but it was enough for the team to cap 66 goals and win the La Liga. Other players of note were Juan Carlos Valerón,  Djalminha, Mauro Silva, (the legendary) Donato, Fran, Victor Sánchez and Nourredine Naybet who formed the core of the conquering ‘Super Depor’.

While ‘Super Depor’ didn’t successfully defend their title in the 2000-2001 season, the emergence of powerful striker, Diego Tristán marked another interesting period for the team. The star player won the Pichichi award for the 2001-2002 season (which was won by Valencia CF) as Deportivo emerged second again (which was not bad finishing above high-spenders FC Barcelona and the club that is perpetually careless with money, Real Madrid. I rooted for Valencia for sure during all these times, but when the TV would show Depor games live, I’d never hesitate to watch even if it was at 3 a.m. in the morning.

Perhaps, ‘Super Depor’ is also better remembered for its participation in the Champions League – in the 2000/2001 season, it reached the quarterfinals, losing to Leeds United (another team which I would love to see reaching the Premier League again) 3-2 in aggregate. In the 2001/2002 season, it bowed out tamely to ManUre, whereas in the next season (the year FC Porto made headlines by winning the European Champions League), Deportivo was halted at the semifinal stage by the eventual champions. 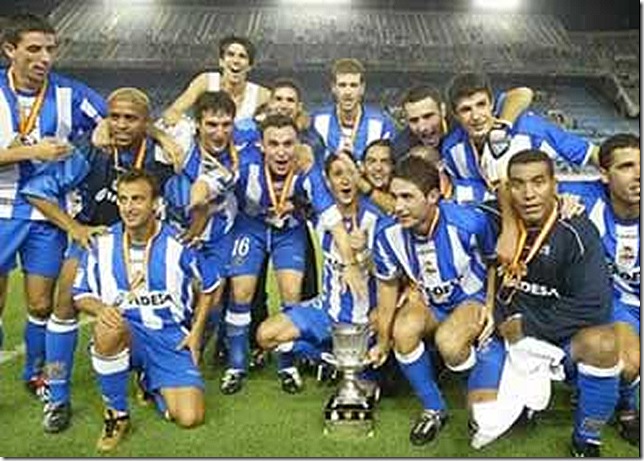 After that amazing run in the Champions League and with so many of its core players either moving on or not performing to the same level as before, the team drifted into an unfamiliar eight place by the end of the 2004/2005 season (the year that Valencia CF failed to defend its title and finally settling for seventh spot). After Irureta left, the ‘Super Depor’ tag ominously became a remote dream to all but its ardent fans.

As we reminisce a golden era for the men in white and blue, we would not be surprised if one day, the ‘Super Depor’ would rise from its ashes again and reclaim its rightful place  – not just for a place in the La Liga (which is too small an ambition for a club with a legacy such as this) but also in Europe.