It’s that time of the year again when the latest football (soccer) video game offerings by Konami and EA Sports are put up for contention again. While the current-gen versions are getting most of the limelight under the soccer spotlight, the PS2 is also credibly holding its own quietly in one corner. I’ve no credible figures to crunch in terms of sales of PS2 software in latter half 2010 but you can access the stats for the 1st half here. Not bad for a 10-year old console which only the majority of gamers are speaking fondly of but not willing to fondle the right buttons anymore.

Lionel Messi of FC Barcelona graces the cover of the latest version of PES 2011 this time. It’s probably the 3rd time running that Messi is featured as the model and the 2nd time that he’s going solo after sharing the limelight with Liverpool’s Fernando Torres for PES 2010. I’m not fussy over covers and don’t care if it looks good or not. Besides, I’m not a fan of Messi although it was really good that he helped destroy Manchester United in the 2009 Champions League Final.

*Main menu – Konami has chosen a side-scrolling menu bar for this year’s PS2 version and it was rather impressive visually. The menu can also be easily navigated.

*Interface – Simple, clear and unobtrusive. You can get down to playing an exhibition match very easily and

*Graphics – The visual elements have not changed very much from previous years’ versions. At the risk of sounding like a broken record, the PS2 doesn’t crunch polygons and impress people with its output these days and that’s as far as the machine could go. Of course, there are nice touches as regards the spectators which are better than FIFA 11’s ugly grey cardboard pinups. Graphically, though, PES 2011 isn’t nearly as beautiful as FIFA Soccer 11, though I bet that most gamers already know that from several years of playing essentially the same thing. As far as last-gen graphics are concerned, though, the entire package is rather good.

*Sound – The most noticeable is that of the commentator section with Jon Champion pairing up with Jim Beglin which isn’t that much of an improvement over his previous partnership with Mark Lawrenson.

The ball feels slightly more weighted down this time round and controls are quite tight. Overall, a slightly different experience but not a bad one. Long-ranged strikes are slightly more easier to pull off this time round. No noticeable lag but the game is indeed a bit more difficult.

*PES 2011 for the PS2 also comes with the Copa Santander Libertadores 2010 out of the box which is a rather good tournament to play, seeing as the teams featured there are authentic and could not be edited by default from the edit menu. (If anybody knows how, do let me know). You could also be reunited with Ronaldo and Roberto Carlos at SC Corinthians Paulista.

*UEFA Champions League – as was last year’s welcome inclusion, Europe’s premier football continental club competition is also presented again. The blemish is that Arsenal, Chelsea and some other teams are unlicensed.

*New faces – the PS2 version cannot be reasonably updated with player faces and kits and players of this console must rely on some resourceful modder or next season to commence in order to enjoy this. Thomas Vermaelen, Kieran Gibbs, Federico Macheda, Moussa Dembele, Sander Boschker and more are given their own exclusive faces in this game. Real Madrid’s younger players also get some cosmetic changes as did the squad for Valencia CF where even Juan Mata and Pablo get their own respective facial features. You’d be pleasantly surprised to learn that the French Ligue 1 and the Italian Serie A have also been given more attention this time round in terms of original faces, although the Dutch Eredivisie still suffers from the annoying player faces who stare at you with exaggerated eyebrows and ugly sneers.

*New teams – While EA Sports enjoys the best of licensed material in their FIFA series, I think that it could be a case of too much of a good thing. When the PES version comes up with something new, I’d look forward to it! This time, Werder Bremen and FC Rubin Kazan makes a grand appearance in Konami’s football stable and the Sp**s as well. FC Bayern Munchen has also staged a comeback. While we gain new things, we have also lost some – Liverpool FC has been delisted, in addition to the Brazil national team (boo!). Otherwise, it’s almost pretty much the same amount of teams that you can play around with.

*Accurate World Cup 2010 teams – Holland and other World Cup teams (licensed or otherwise) feature their roster as per the tournament. So you won’t see Rio Ferdinand taking up his usual spot beside John Terry for the Three Lions squad and is replaced by Michael Dawson.

*Become a Legend / World Player mode – Haven’t got time to try it as I’ve just gotten the game yesterday.

*Unlicensed teams – Biggest upset is that Brazil national team makes a shock exit from both systems. Arsenal still unlicensed since PES 6. Sevilla CF also gets the boot for some reason.

Edge of FIFA Soccer 11 – World Cup rosters, much more new faces, Master League, the same enjoyable gameplay which is the hallmark of PES games. You can read all about the PS2 version here. 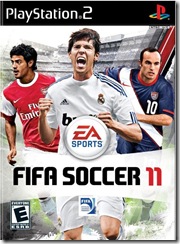 I used to really like the FIFA series considering that was the era before PES becomes an upstart to EA Sports. FIFA 99 and FIFA 2002 were favourites but anything after that just doesn’t click and it’s not because of PES at all. The worst was FIFA 2004 which become so annoyingly monotonous that it got deleted from my computer at almost the instant it got installed.

I picked up FIFA 11 because it was actually quite good for the past few years for the PS2 and I wondered how it would fare this time round. A summary of updates for the PS2 version can be read here.

Marketing ploy at work here – We have Arsenal’s Carlos Vela tempting the Mexican market; Kaka making sure that the international gamers sit up and watch while Landon Donovan sustains American interest.

*Interface – Clean, user-friendly menus are part of FIFA’s charm. What is not so hot is that if you left the autosave feature off, almost everything that you do when changing your options and the like will be arrested by the annoying save confirmation prompt.

*Graphics – I do agree that FIFA 11 for the PS2 looks beautiful. Of course, you can barely discern any graphical upgrades from previous versions, but the overall textures and lighting wins this category for EA Sports. The quasi-blurry effects more than redresses the PS2’s shortfalls in the textures department and continues a winning formula.

Unfortunately, the players’ faces have become old from too much recycling. If memory serves, Ruud van Nistelrooy has been having the same long grey hair since FIFA 2005 and Dimitar Berbatov’s big head dates from around the same title as well. (More on this later)

EA Sports certainly run the risk of making this game an old game with only roster updates. I for sure can’t note down any tangible changes in the gameplay itself. It’s still rather fun, though, but certainly nothing new. Even with EA Sports promising AI Support and Intelligent Football for the PS2, it’s quite hard to nail down the differences, if at all. The gameplay is fluid, with the odd lag when the action heats up, but is overall a commendable experience. Scoring goals in FIFA 11 is quite a bit more satisfying than in PES as there are so many ways to do that.

*Be the Goalkeeper – what’s it like in the goalie’s perspective? It’s quite fun for a while when you’re representing a mediocre side and up against a formidable opponent when you’re sure to be peppered with shots. Still, on the flipside, it ain’t so great being Petr Cech when the large part of the action is upfront.

*Massive amount of teams and licensed leagues – It’s always cool to be able to pick an authentic team and lead them to glory in your chosen tournaments. As far as sheer size and scale are concerned, you could fashion out random cup tournaments and no one will say no to taking part or as an alternative, send a squad full of weird names and horrible team kits with bands running across it unless you work hard and rectify it before. This is the real deal as far as world football is concerned.

*New ways to unlock your bonuses – Always fancied the 3rd team kits in the shop but haven’t had the points nor the patience to garner them? Now, there are more minor challenges which awards you points for your efforts. On 5 December 2010, Team Oranje beat Team USA 2-0 with Robin van Persie and Wesley Sneijder on the scoresheet to scoop up the American award for scoring first against the opponent and going on to win the match. That was a cool 2,000 points to earn! Who says football isn’t always about winning?

*Same old faces, hardly new ones – Trust me, the same faces have been featured through the years for the PS2 version of the FIFA series. At Arsenal, for instance, Manuel Almunia is still some random joe with a cocked-up mug; Bacary Sagna is someone with generic bug eyes and cornrows while practically no one else has had cosmetic enhancements. Thomas Vermaelen, whom I think did rather well last season to merit some recognition, didn’t get upgraded either. Where’s the love, EA Sports?

*Same gameplay – Guilty of being an old game with roster updates. Of course, you could blame the PS2 for being so old…

*Removing some content – Where is BayArena for Bayer Leverkusen? Real Madrid is still playing in an Oval Stadium. Luckily Valencia CF gets the Estadio Mestalla back.

*Inappropriate situations – Your awesomely superior team of 5 / 4.5 stars celebrating like they have won the World Cup when they have only beaten someone like Carlisle United. I think that the PES counterparts are a bit more realistic, though their own goal-scoring celebrations still leave much to be desired. Goalkeepers who made saves or watch opponents sky their shots are always pumping the air in delight, which was nice to see for the first few occasions but not when they have conceded so much goals that celebrating like that seems strange. Of course, FIFA 98’s over-exaggerated macho man look when taking corner kicks and hyping the crowd when the score is in the player’s favour was pretty good, but gets tired quickly.

For such a tiny software market as the PS2, it’s probably not very important as to who wins this year’s accolades for either company. Having said that though, the PS2 is still an important game console in certain parts of the world such as South America and India.

I’d say that PES 2011 still plays the more satisfying game of football and that the feeling of being in control is the winning factor. FIFA 11 makes scoring goals a joy, though as there are just so many ways to find the net as opposed to the straight-jacket style of PES.

In terms of new content, PES 2011 strikes home with the Copa Libertadores which I may not hang around long enough to finish but can certainly provide some additional options to the casual gamer. Additionally, PES also confirms many new faces which adds to the authenticity of the game even though it possessed far fewer licensed teams. There are huge pockets of unknown faces where the lesser-known rosters are concerned but the overall effort to upgrade the product is good.

In a nutshell, PES 2011 provides far more new content than its FIFA counterpart and this factor has bagged the points. FIFA has dutifully updated its squad rosters but didn’t meaningfully add on to FIFA 10.